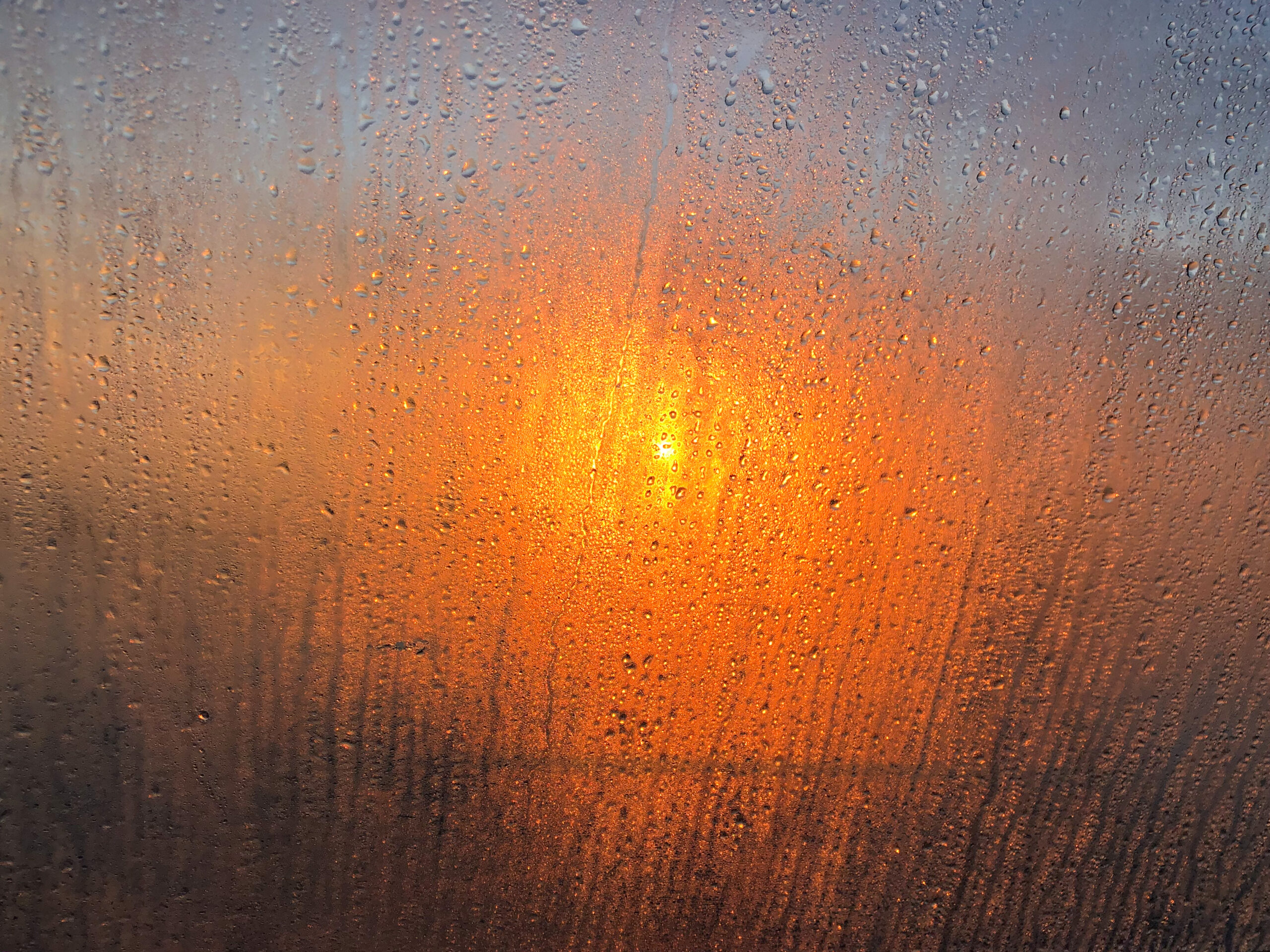 It’s just over a thousand miles from Tongatapu at the southern end of Tonga and the northern port of Opua in New Zealand. What makes this passage different from pretty much all the sailing we’ve done so far is the transition from tropical weather (low pressure systems and troughs) to the temperate cycle of fronts dividing high pressure and low pressure which march eastward across the Tasman sea and wash over New Zealand in waves. The ideal passage strategy is pretty well known, but perfect cooperation from the weather is probably pretty rare. 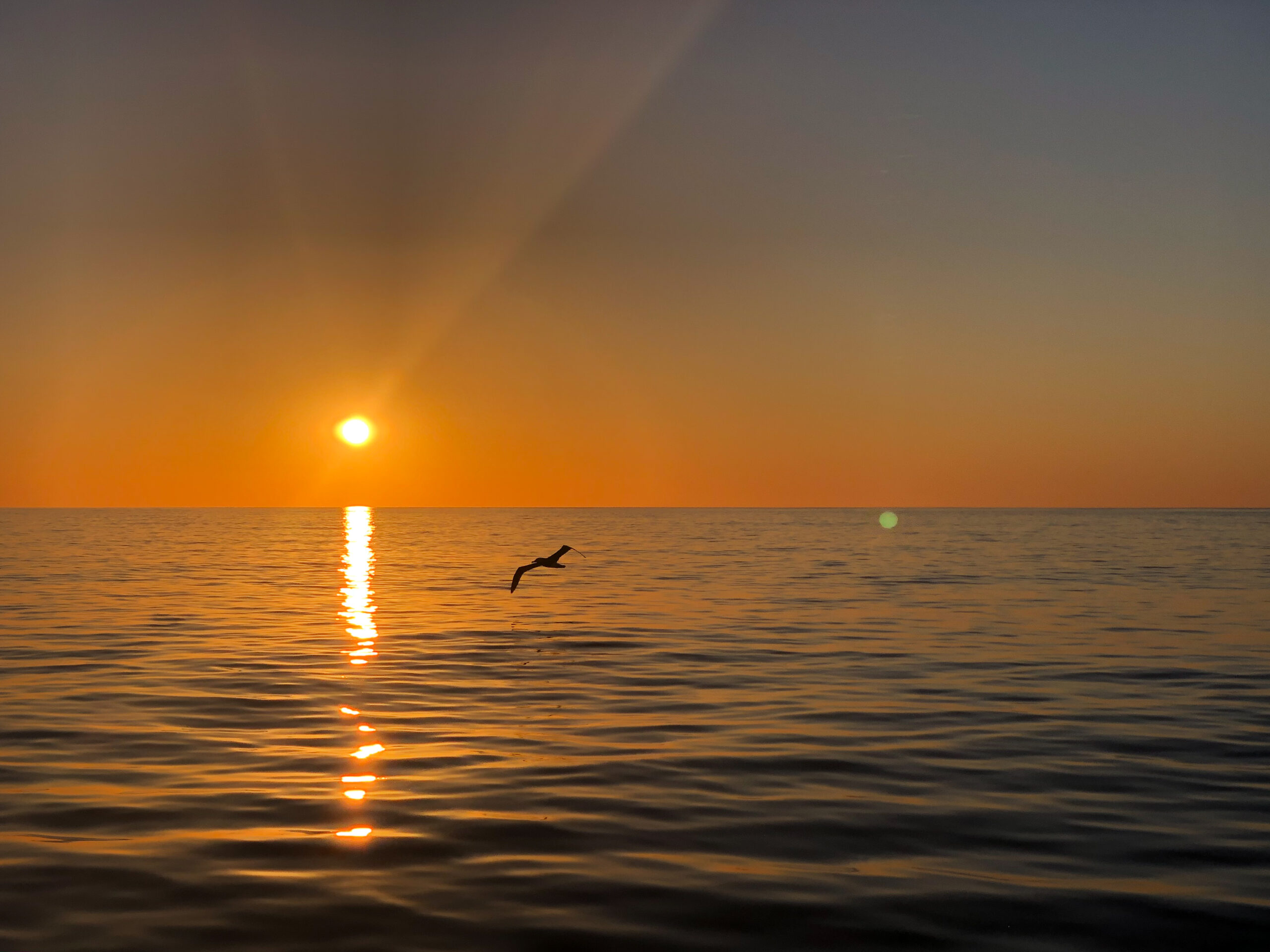 We used a weather prediction software called Predict Wind which allows us to download four different models of wind files (called gribs), GPS (the US model), ECMWF (the European model) and two variations on these models produced by Predict wind PWG and PWE.

Generally, they are in pretty good agreement for one to three days out and then they tend to disagree on what’s going to happen, sometimes quite radically. The value of comparing different predictions is that it gives you a heads up for ‘what-if’ scenarios.

The most common strategy for this passage is make a long westward loop, with a stop at the Minerva reefs which provide a good anchorage and a chance to get the latest predictions for the final push. 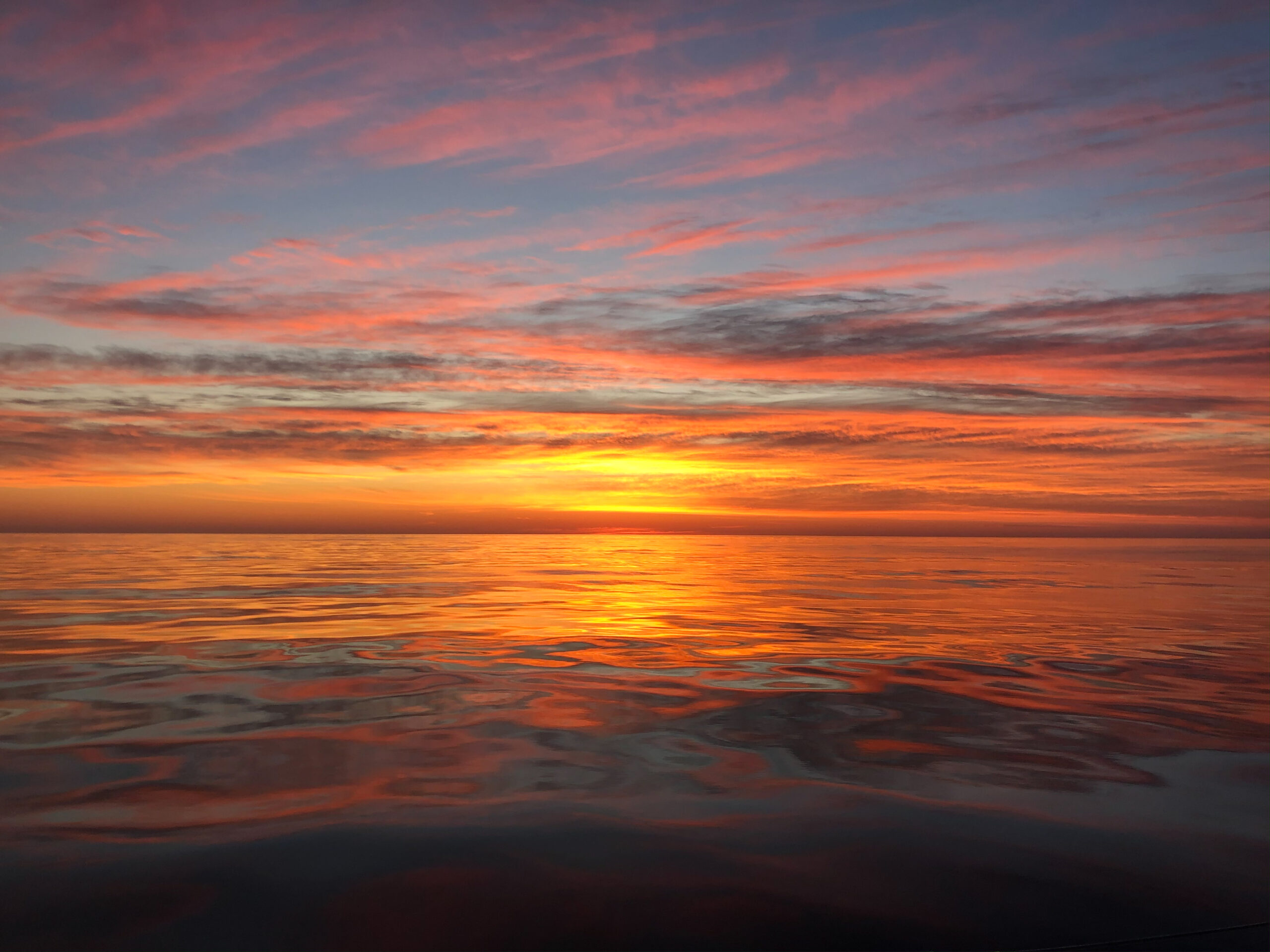 What everyone looks for are decent (enough) conditions to make that arc as you leave Minerva (not bashing directly into southern head winds) and timing which assures you won’t encounter a nasty cold front north of 30° South latitude.

The ideal is to arrive on the tail of a high just ahead of the front with nice north or even northwest tail winds … but that timing can be risky.

As we arrived this year in Minerva we’d been looking at the models that suggested ten to fourteen days out that there might be a weather window around November 6th (which is the date we arbitrarily listed with NZ immigration as our arrival date). The European model, however warned of some very high winds from due south or even south west that would make going straight from Minerva tough. Still, the other models weren’t showing conditions quite as strong. They predicted that the high pressure creating this squash zone wouldn’t stall as long as the ECMWF predicted. We got to Minerva very early and waited for daylight to go in (in fact, we now know you can go in and even anchor in the dark, the Navionics charts are accurate and there are no big hazards). We could see boats arriving behind us and some came in after us, but several made the decision to keep going. One Kiwi boat we know left the morning we arrived, also hoping to make a possible earlier arrival in NZ. 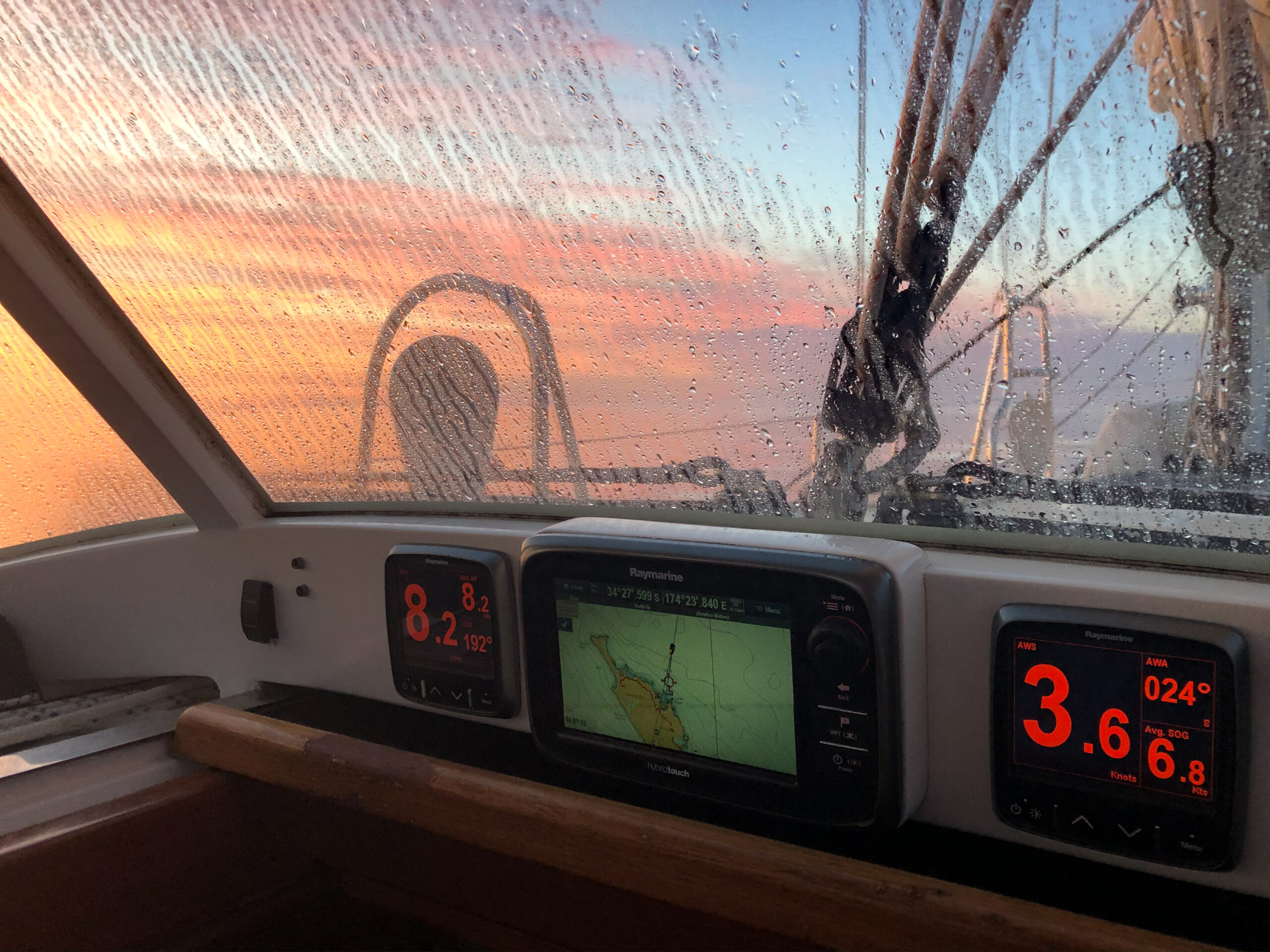 As it turned out the European model called this one, and the boats that continued on had a pretty tough time. One trimaran we know reported 7 meter seas and 50 knot gusts, the captain described it as an ‘exhilarating, wet sail,’  but it didn’t sound very comfortable. I’m not totally sure his crew was in complete agreement.  The experienced Kiwi boat called it “gale conditions.” One boat turned back for Minerva after two days. The bottom line is that no one who continued on was making very much southing, despite getting beaten up.

We spent three nights in Minerva watching the weather and enjoying that magical spot. The winds blew in the twenties but it’s a very solid anchorage and was perfectly comfortable even when it got a little bumpy at high tide.

By the time we were ready to leave for the 800 mile leg to New Zealand on November 1, there were 30 boats anchored in Minerva (it could fit a hundred easily). Twenty-three left at the same morning, and we joined them, leaving toward the end of the pack. 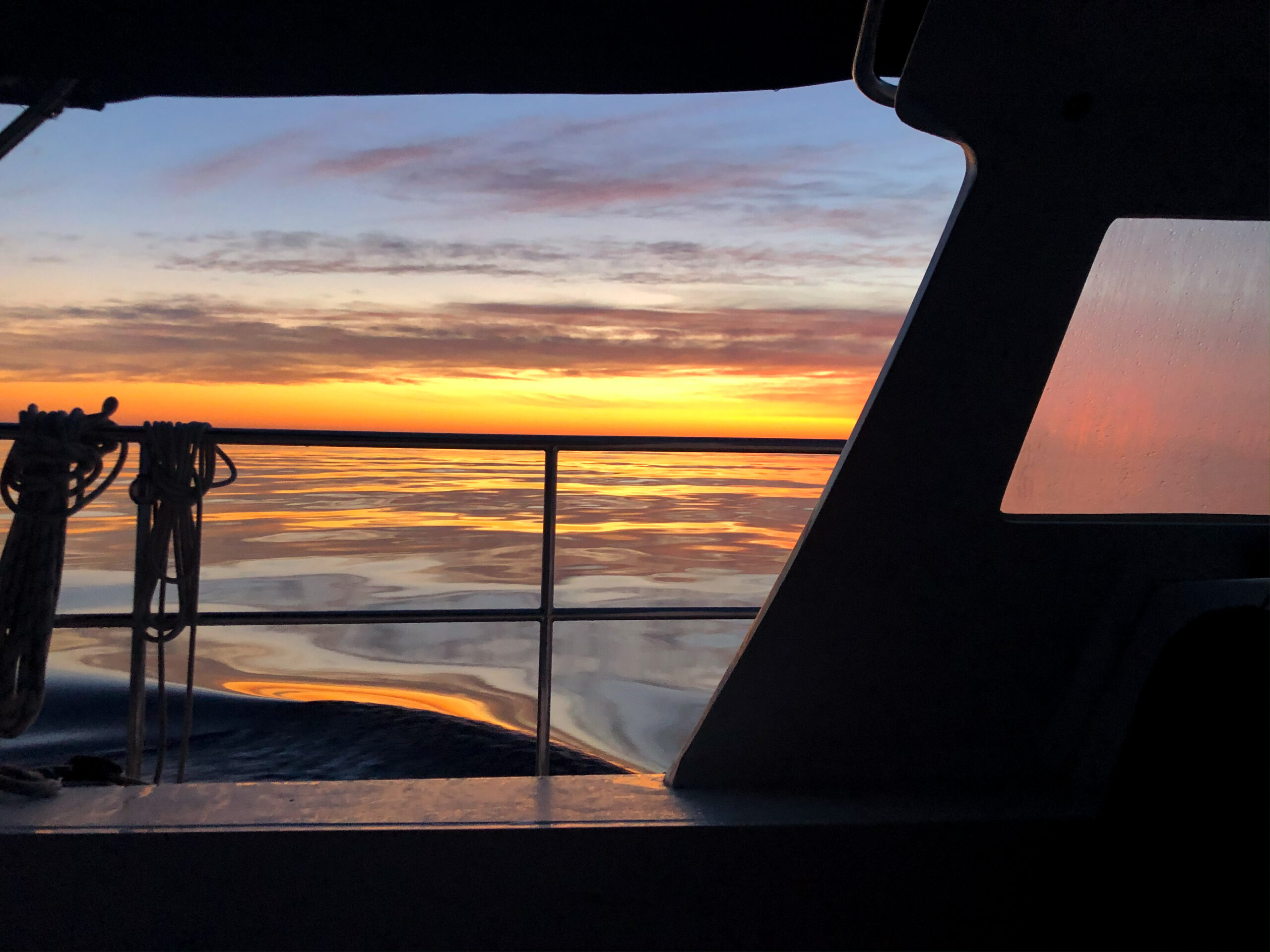 What we were seeing in the gribs that made us go were predictions that the wind should start to swing east as the high finally moved off and that the next front ‘shouldn’t’ hit New Zealand  until the 7th (a weak front) and maybe not even until the 9th or 10th (more of a real front). Based on watching the weather this year, I’d say that made for an unusually generous weather window.

The two obstacles we needed to plan for were wind and seas that were still more southerly than optimal and what looked to be a big chunk of calm airs for the last two days. For this passage I think most would accept some windless motoring rather than encounter the 6 meter seas and gales conditions off the coast of New Zealand that sunk a boat this year 22 miles from her destination. 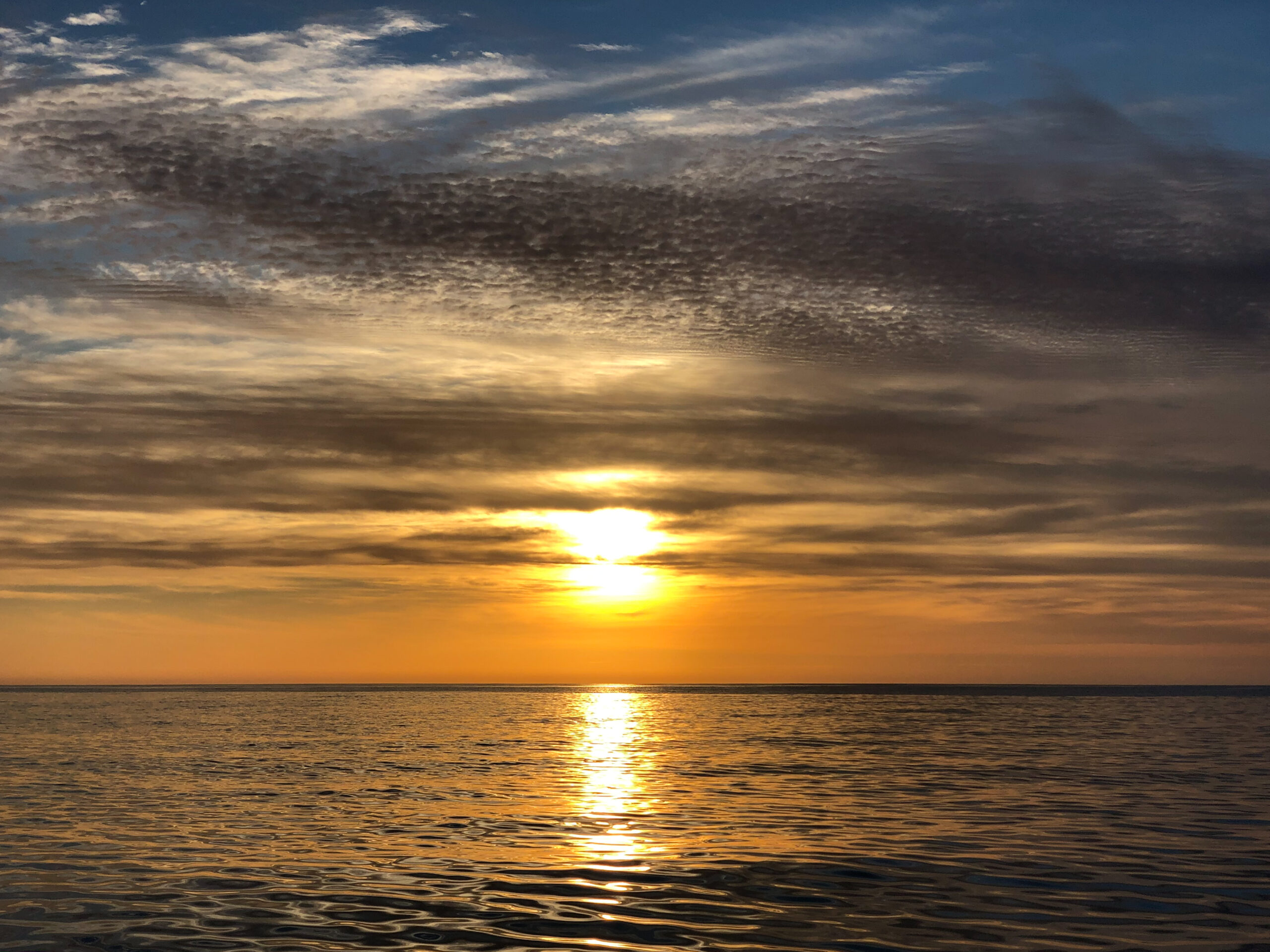 This is the passage that Allora was made for. She sails to windward like a champ so that we were able to comfortably point higher, meaning head south a little sooner, than much of the fleet. She’s also fast with wind ahead of the beam, mainly I think because she handles the seas so well. We started passing boats the first night, most during Wyatt’s midnight watch. Diana had volunteered to help run an SSB radio net (the “Tonga to NZ” net), so we were apprised of most of the boats positions that way. By the end of third day of windward sailing (45-60 degrees apparent) we had passed everyone except a Dutch trimaran. Then the wind began to die, and this is where Allora’s advantages as an offshore passagemaker also shine. We carry 190 gallons of diesel so we had no reason to save fuel and wait to start motor sailing to keep up our speed. Our experienced Kiwi friend, Tony, who’s done this passage many times had counseled us not to let our boat speed drop below five knots, and since we had the fuel we turned directly on the rhumb line and kept her moving. With an 80 horse Yanmar, Allora also motors comfortably at 7.5 to 8 knots (uses more fuel, but we had it, and it is better for the diesel to run hotter). In the end, we used our engine for two days, which is the longest we ever have. But boats that waited to turn their engines on arrived a day later than us, so they ended up motoring pretty much just as long. Boats without the fuel range came in two days after us when the wind began to pick up again. We arrived at 1:00PM on the 6th of November. 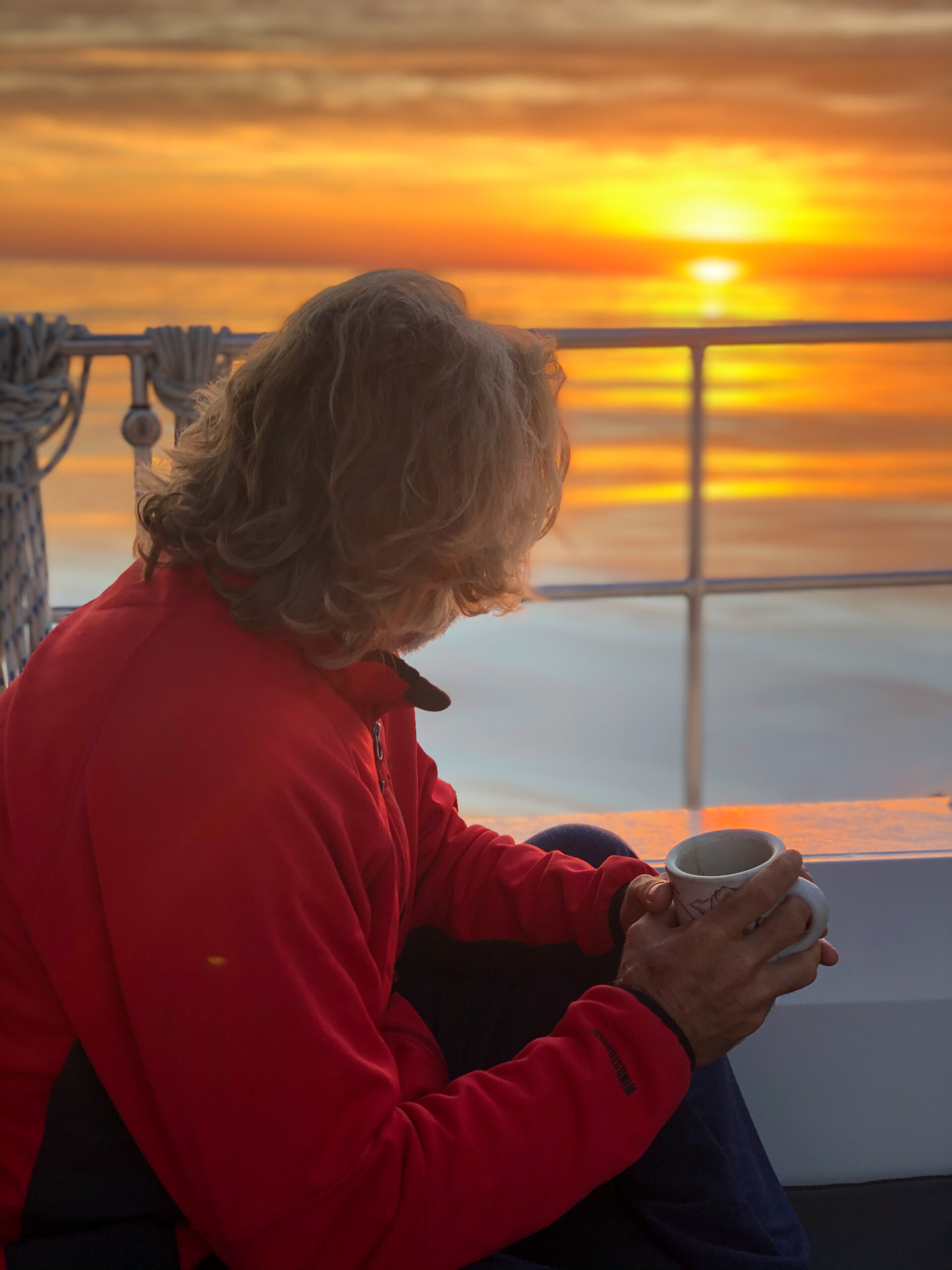 Okay, so now please forgive me for a little boasting. A lot went into planning this infamous passage and we’ve been thinking about how it would go for a very long time. We were the first of the “Minerva Yacht Club” boats to arrive in Opua, ahead of the trimaran because they did not have the motoring capacity we do, and ahead of a 52 foot catamaran because that boat could not sail as fast with the wind ahead of the beam.

Part of what made this a great passage was our strategy. Initially, we heeded the common wisdom of heading for “John’s Corner” at 30S 173E. The idea of this approach is that it gets you closer, but you’re still in a position to slow down if a front comes in sooner than predicted so that you confront it above 30 degree where it is less dangerous. Then, as the wind swung more east we headed up, but not right away on the rhumb line, but cutting the corner. We were faster at 50 degrees apparent and getting a better distance made good (DMG) to New Zealand. Boats that headed for the rhumb line too soon fell behind us because the seas were rougher to the east. Boats that waited even longer to head up added a lot more miles to their passage. Using the engine to motorsail when our speed dropped below 5 knots, allowed us to turn on the rhumb line once it was clear that the coast was clear for a Nov 6 arrival, and assured that we could spend one less night at sea. 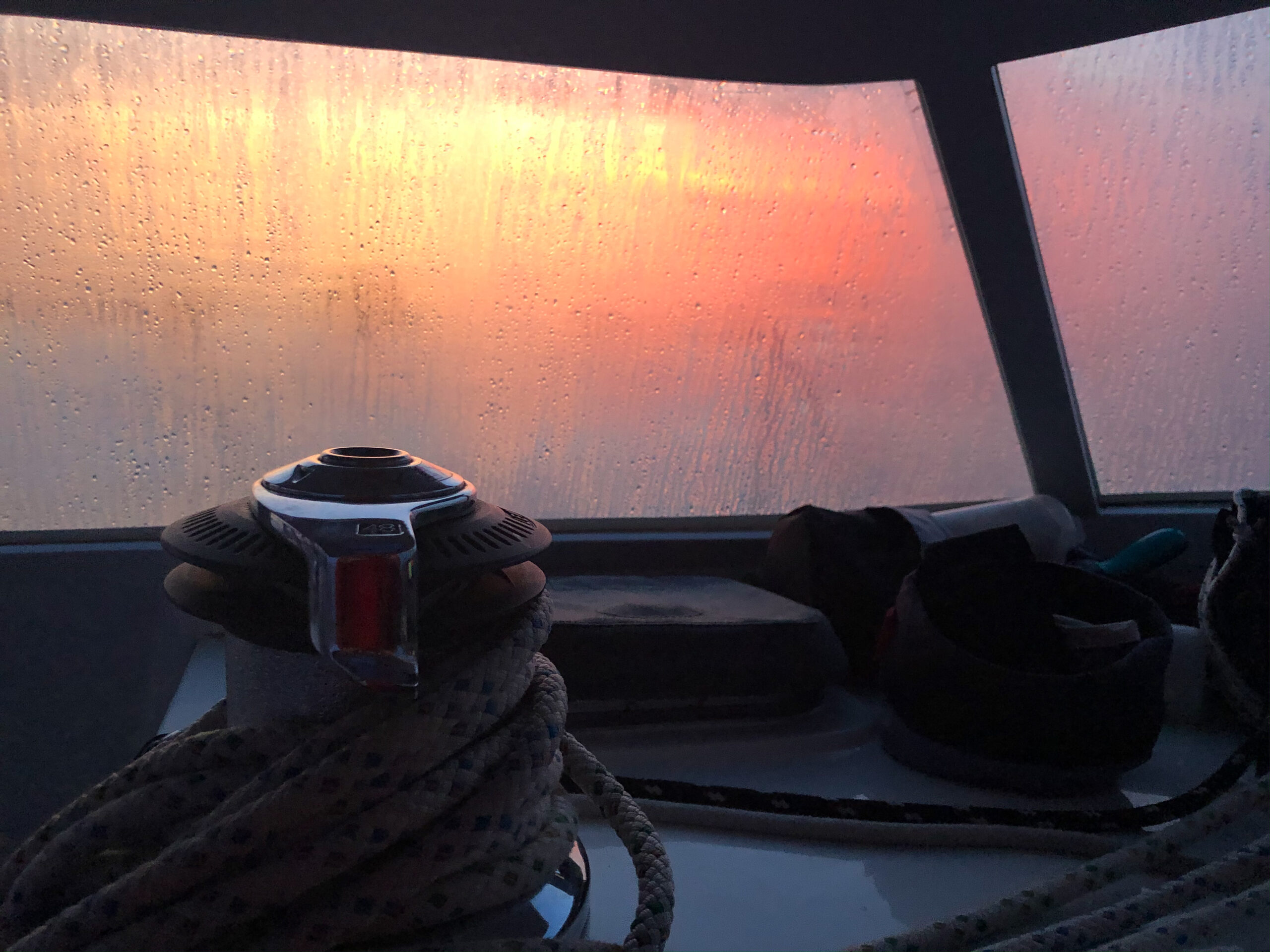 Though we love to sail and hate to motor, the conditions were eventually so beautiful and glassy calm it was a different kind of pleasure. With the sails down it was also easier to detour when we spotted a pod of pilot whales and to pause for Wyatt to get some beautiful shots of the first Alabatross we’ve seen. It also gave Diana, Wyatt and I a chance to get the boat ready for inspection by Customs.

In the end, we couldn’t have wished for a better passage and we couldn’t be happier with Allora. What a boat! 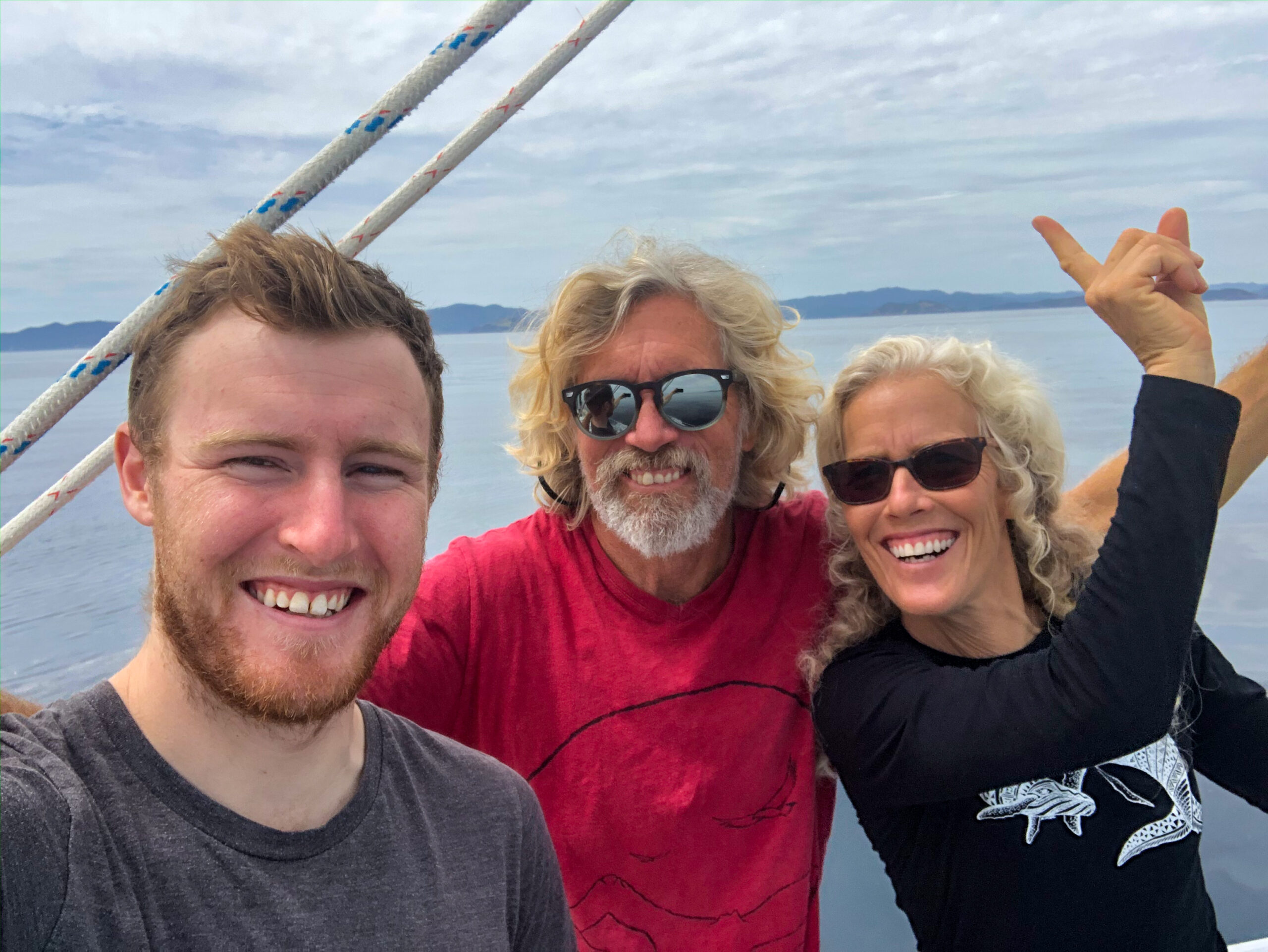 Diana disclaimer: All these shots are taken during the placid last two days of our passage. Before that, the camera wasn’t coming out too much!!