My first series of thoughts were about the precariousness of our situation, and how much we depend on our engine, despite being a sailboat. What in the world would Captain Cook do? We had arrived at the entrance to Preservation Inlet a couple of hours too early, despite our attempts to slow Allora down. No wind but a big southwest swell colliding with a northerly chop was making going slow under power uncomfortable, the mainsail slatting back and forth despite the preventer. We had already decided to edge up toward Dusky Sound (another twenty miles onward) and go in there instead as long as the forecast northerly held off. I’d barely turned Allora in that direction when the wind began building, directly on our nose, gusting up to 16 knots. No harm in poking a little further that way, to kill time. The Puysegur lighthouse flashed bright and high on our beam, a reminder of where in the world’s oceans we were. Puysegur hosts gale winds or stronger 300 days a year. The weather models showed the next gale arriving by afternoon, by which time we needed to be safely tied up at anchor. The first issue with the engine I noticed was that the display at the nav station was off. Weird, I thought. Then I noticed the gauges in the cockpit, shutting off  and popping back on. Very weird. Then the engine warning came on, beeping insistently. What the heck? Thinking mainly at this point of not waking Diana who’d had a very rough night already struggling to get to sleep for the first few hours of my watch, I quickly shut the engine down. Then as we slowed in the airless swell, I pushed the button to start it back up. It flashed and went off. I tried again, it stayed on long enough for me to get a couple slow, battery dead, rolls of the engine. I had been thinking it was time to replace this starter battery, in fact, I had just had a conversation with Willy on Pazzo about how you know when your starter battery is dead. I should have known better than to bring this up with him, since the last boat conversation I’d had with him was about our flawless autopilot, which literally failed the next day (the first time in six and half years). For a few panicked moments I couldn’t think about anything except the weather forecasts I’d been looking at that predicted wind on the nose if you tried to sail for Dusky and no wind at Puysegur until the arrival of the gale. I guess Captain Cook would just have had to sit there roll in the three meter swell and wait for however many hours it was going to be until the gale chased him in. I didn’t like the sound of that at all. I went below and switched the starter battery to combine with the house batteries and the engine started up. Phew! But the engine warning was still blaring CHCK ENGINE. Amazingly, Diana was still sound asleep, despite about the blaring warning lights, or me running up and down the companionway, starting and stopping the engine. Okay, I checked the oil. I checked the temperature. I checked the cooling system. I checked the transmission. All good. The engine sounded absolutely fine. I’d installed the display at the Nav because supposedly it might give me more information than just CHCK ENGINE… how about check battery, or check electrical system? I reluctantly woke up Diana to tell her about the situation. It definitely did not seem like a good idea to head toward Dusky, we agreed. I figured out how to make the engine warning beep a little bit quieter below and she tried to get back to sleep. I started a slow zig zag toward Puysegur lighthouse, chugging along at under 3 knots, keeping a wary eye on the churning cauldron of Balleny Breaks less than a mile northeast of us and slowly got used to the steady ringing of the engine warning. We motored up the stunning Preservation Inlet to Last Cove as I kicked myself for ignoring my instinct to replace that starter battery. I’d checked it and it seemed okay, but it would have been relatively cheap and easy to replace it, just in case, and not be in this situation. Our first anchorage in Fiordland. We’ve been working on how to set our anchor and lines, a sleepless night from the passage and an engine with a steady CHCK ENGINE still blaring did not make it easier. With a big blow coming we wanted to get it right. 300 feet of rode and two lines to shore.

The weather models, all four that we download via satellite, predicted this narrow window for rounding the great cape on Stewart Island and sailing with an easterly breeze up to the notorious Puysegur before the wind switched northerly with forecast 50+ knot gusts. We put a lot of faith in them, and they were spot on. After a long nap, I started the project of dealing with the starter battery. My idea was to replace it with one of the house batteries. In the process, I had the thought to check the Duo Charger which regulates the battery charging from the engine’s alternators. The installation showed two fuses and as I pulled the wires to find the inline fuse, I noticed the one for the starter battery was a bit loose. I tightened it up, started the engine, and the charging voltage jumped up right to where it belonged. A loose wire. That was all. Three turns of a screw. ~MS 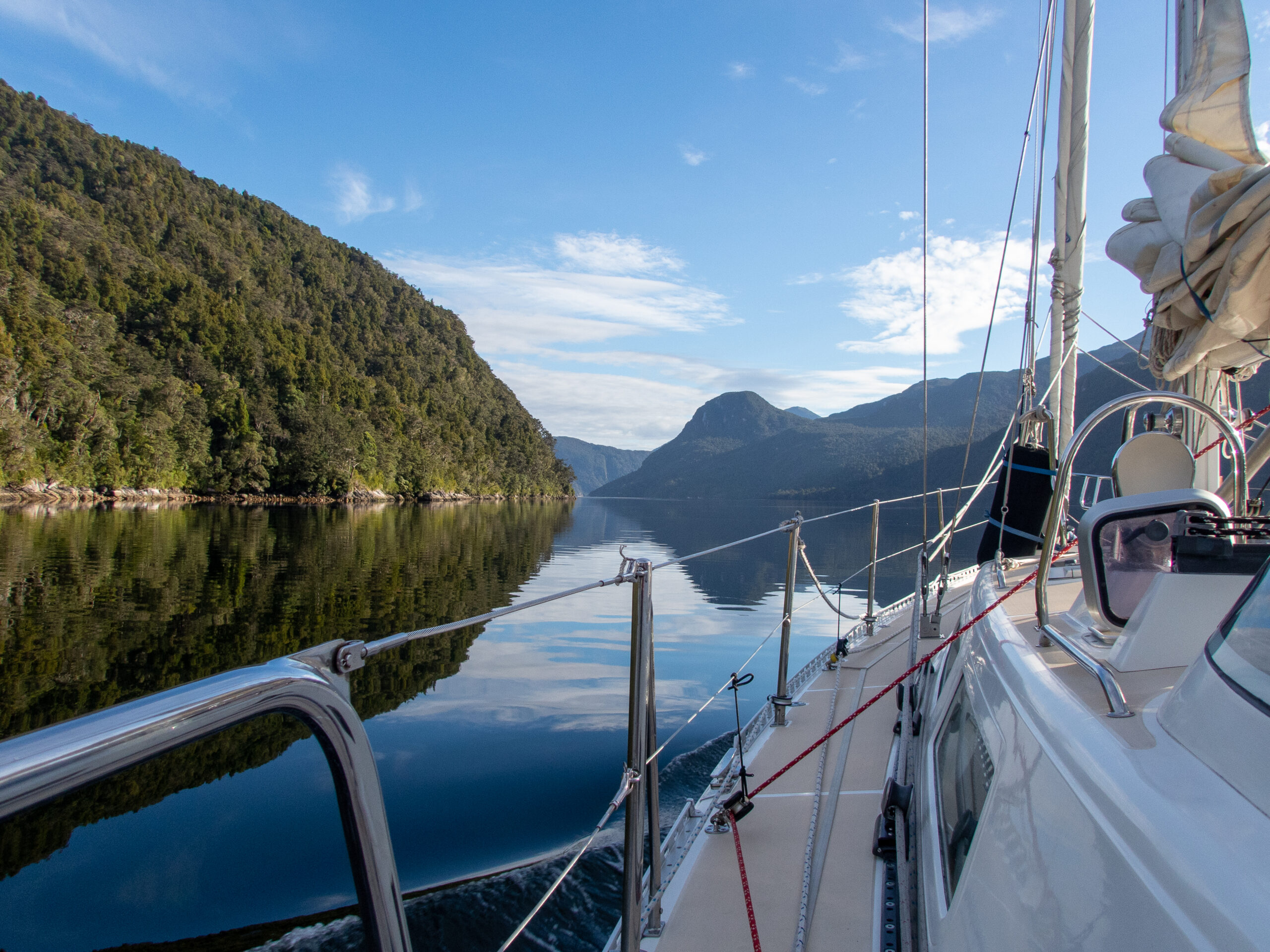 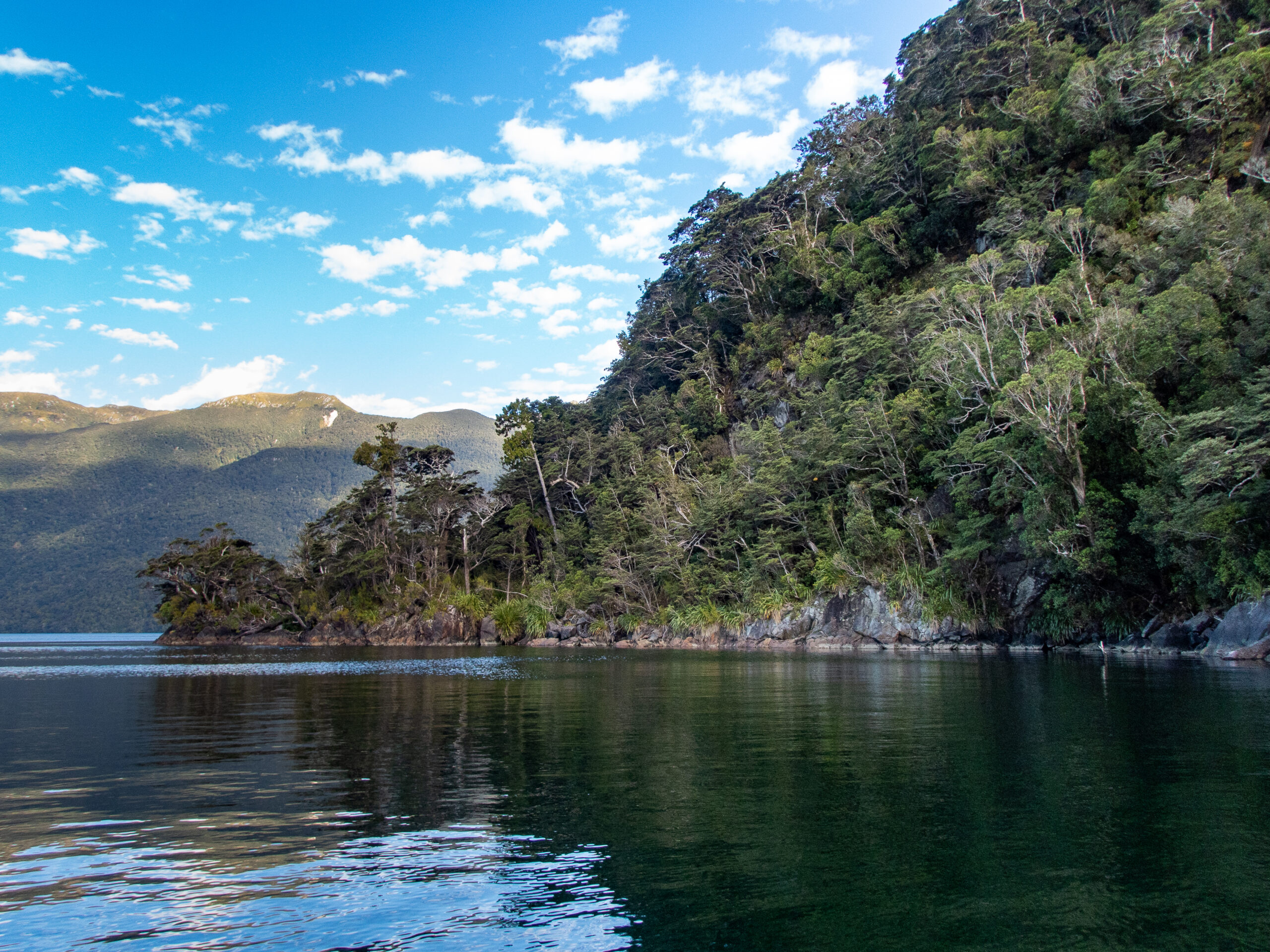 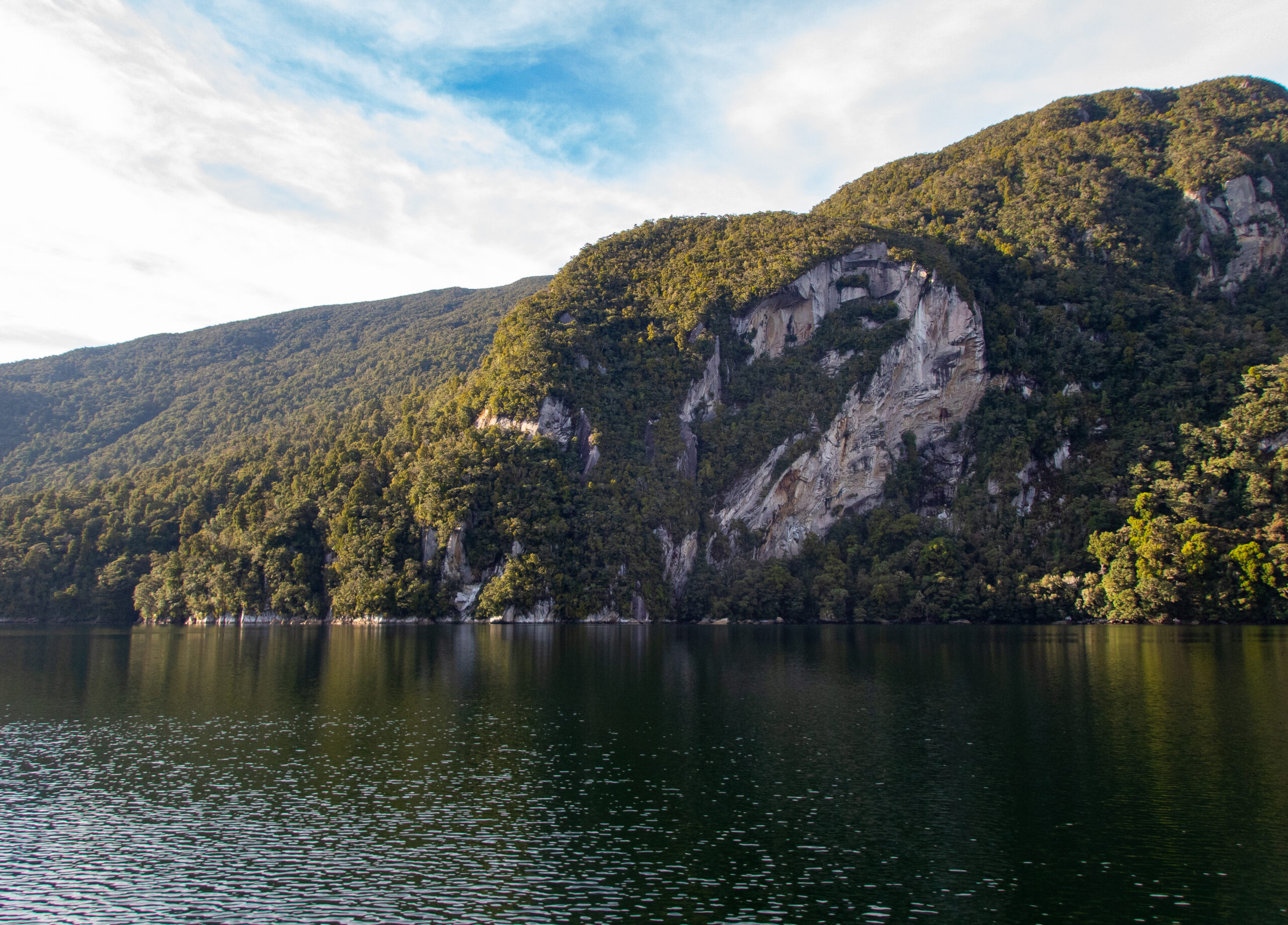 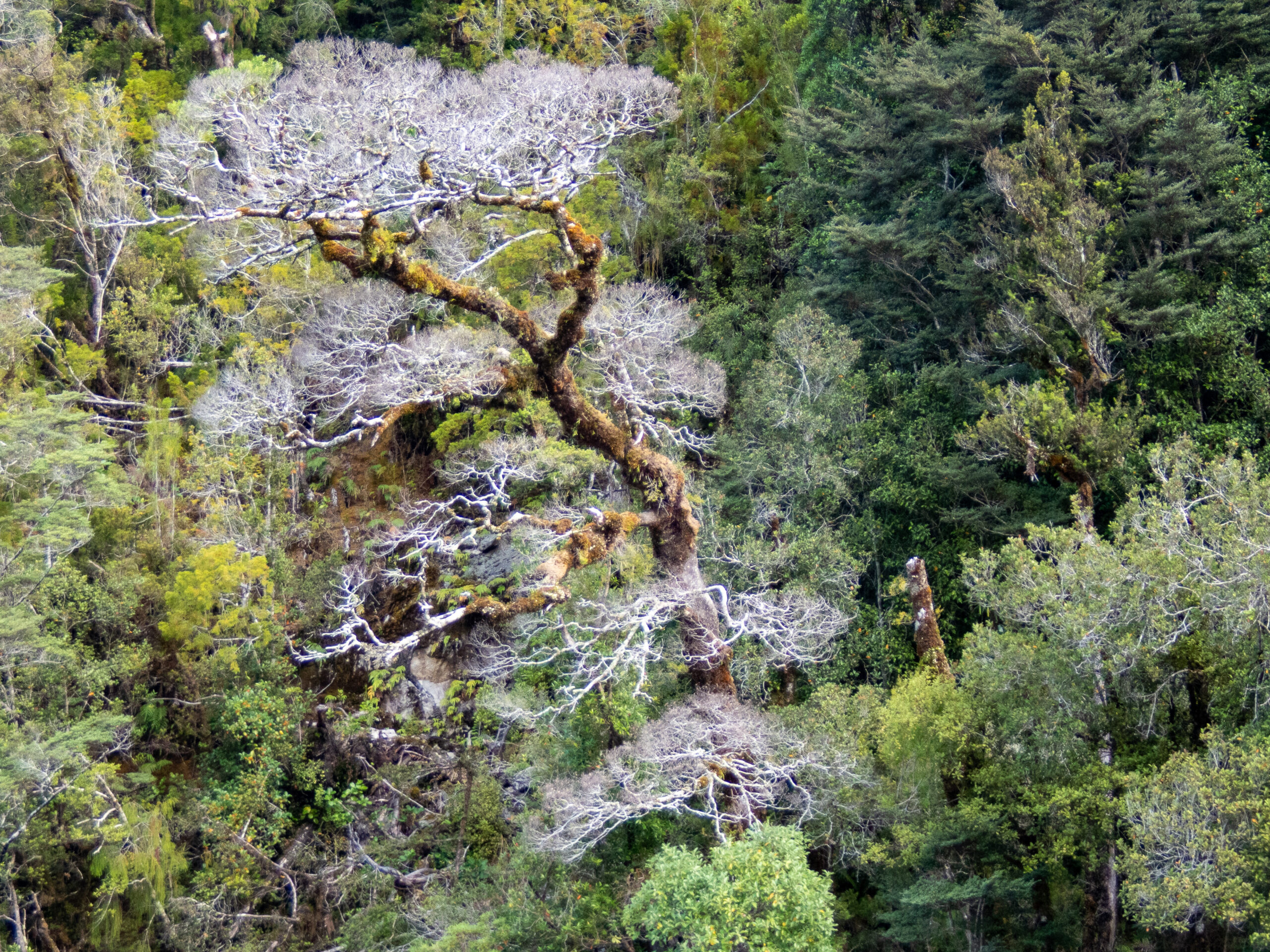 We arrived as the announcement came over the PA on a small Real Adventures cruise boat anchored at dead center in the cove, “the generator will be turned off at 9:30 and then back on again at 6:00 for your convenience…” Two crew walked to the bow, short sleeved black uniforms and to our delight, weighed anchor, the boat disappeared past the head of the cove and left us to the cheerful sound of a small waterfall pouring down the rocks next to a stout blue shoreline. We dropped our own anchor and tied up a boat length from shore. One of our books said that brown trout inhabit the river which flows into the lake above the dramatic falls at the head of the cove. A mere two kilometers as the Tui flies. All we needed to do is scramble up the side of the falls, then bushwack along the lakeshore. We clambered up, relying on roots and branches for hand holds, worrying about the way back down, and somehow made it to the top of the falls. The steep sided outlet of the lake forced us up and up over fallen mossy logs and broken rock faces. Every step was a miniature triumph as we inched and wiggled and scooted minutely closer. The edge of the lake, walking in the shallow was better for a while, until it became a mote of surprise waist deep holes and fallen logs. After hours invested in about a kilometer of progress, we admitted defeat and turned back, now knowing what lay ahead. Many times we expressed gratitude for the near absence of sandflies and the forest herself was pure magic of green mosses and deep ferns and wise old trees. Back at the outlet of the lake where for a brief time there had been trail flags to follow, we found a row boat pulled ashore that we had walked right by. Those Long River brown trout will never know how close them came. The biggest challenge was finding our way back down to the dinghy tied up in the outflow below the falls. We had cleverly laid out markings with sticks on our way up to mark the way, but those didn’t work out any better than bread crumbs did for Hansel and Gretel. We cliffed out, over and over again, but eventually, banged, bruised and muddy found a way down, never more happy to find Namo, dutifully waiting to take us home. 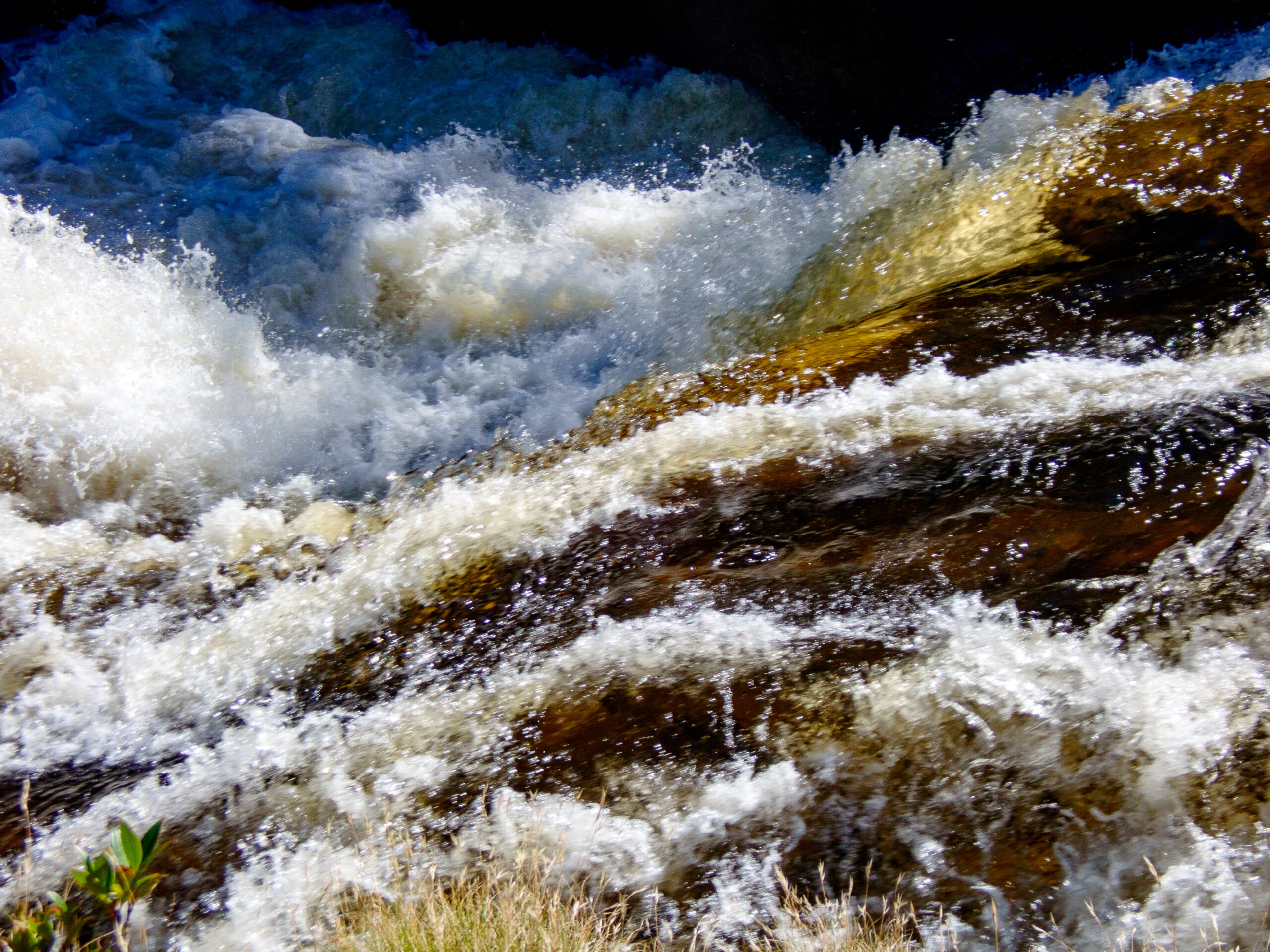 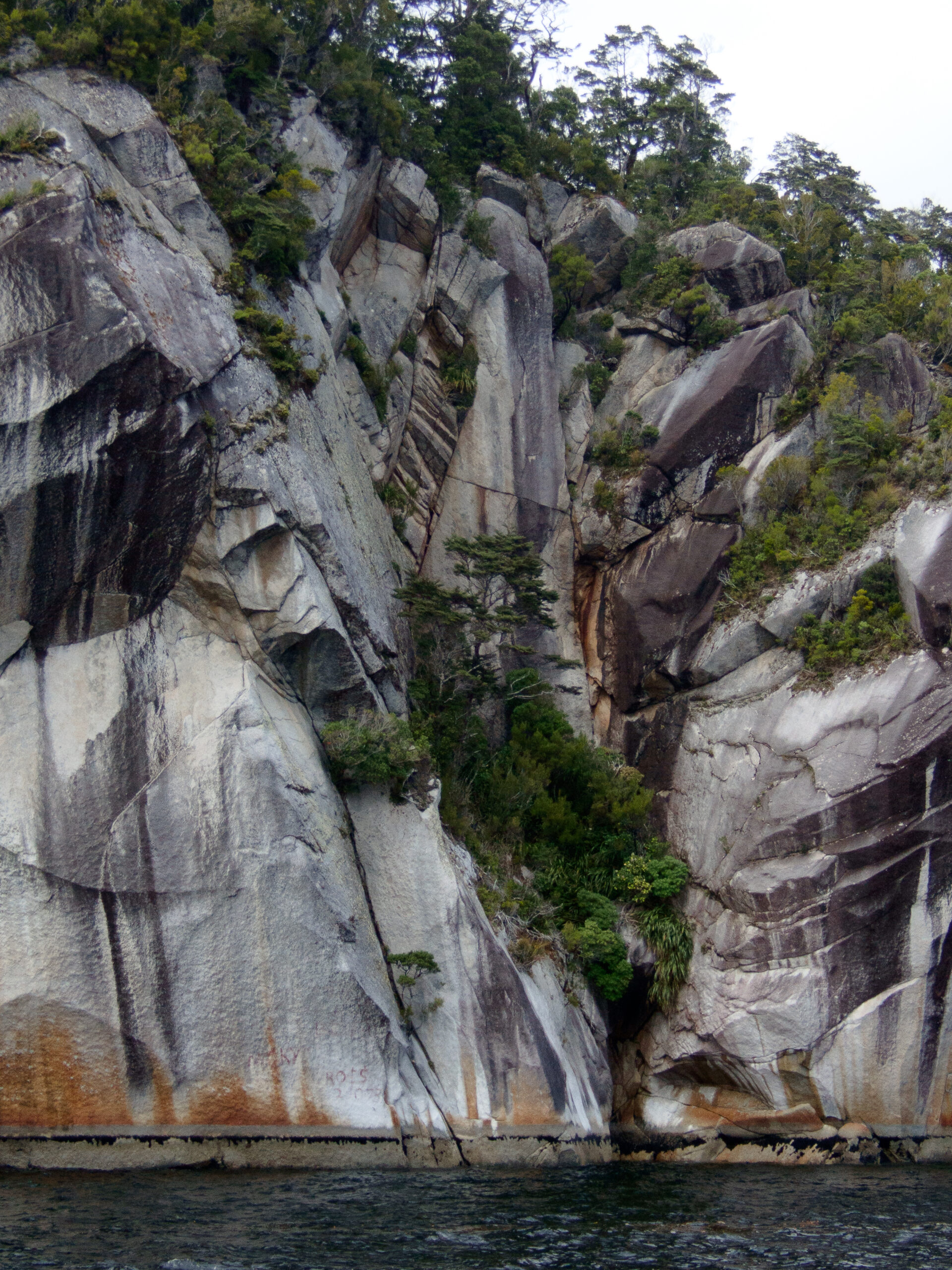 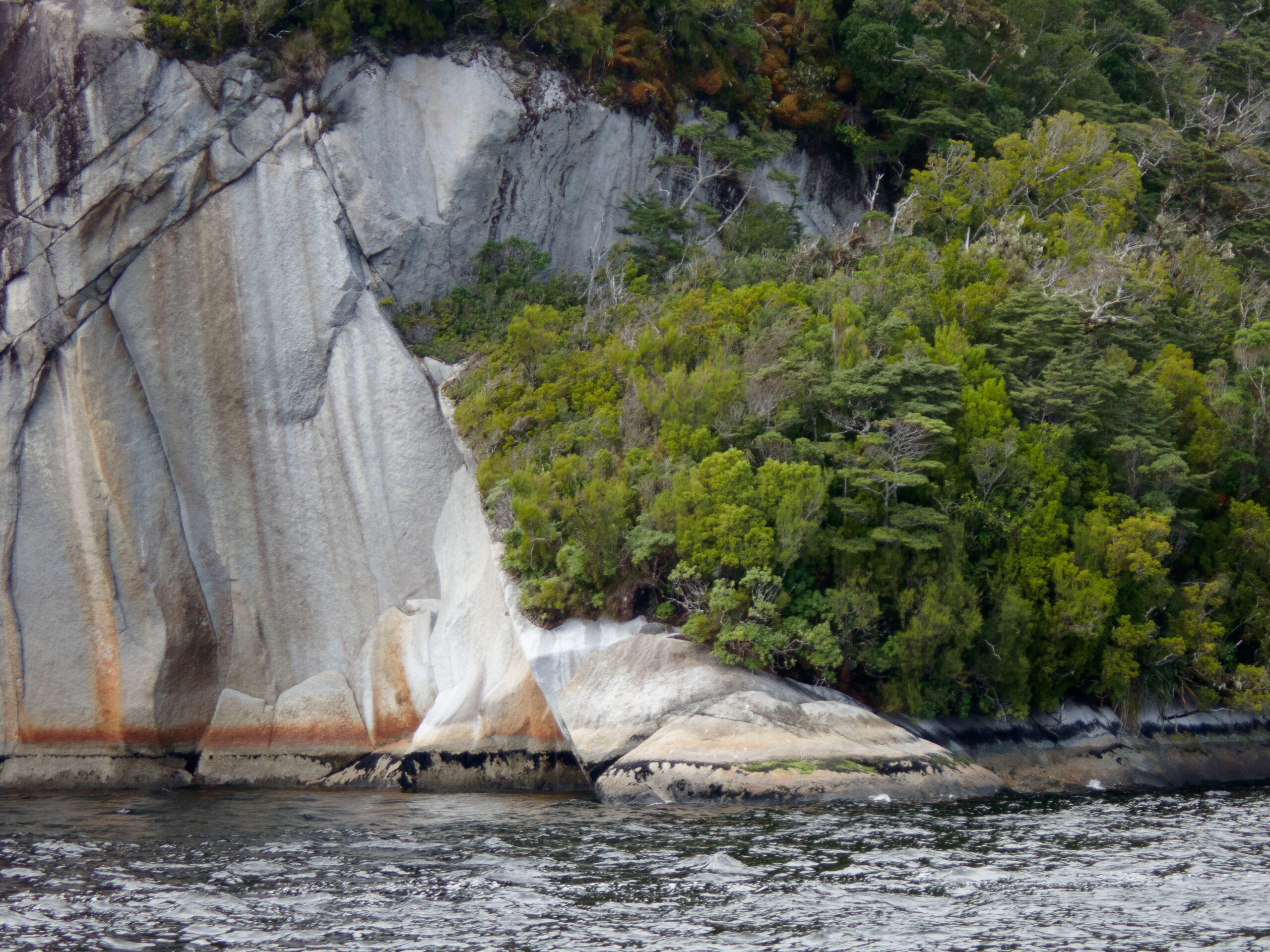